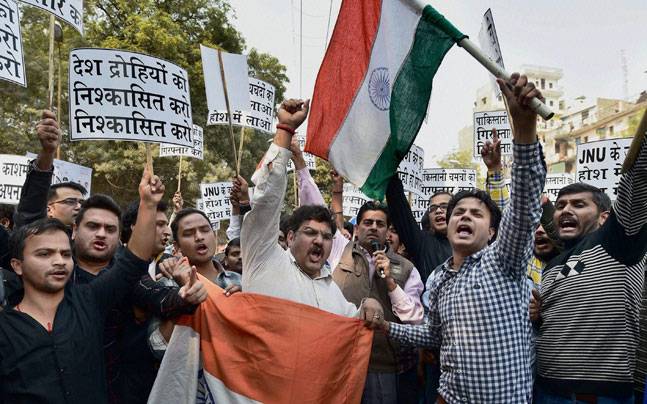 Before few year back and somewhere now also Politics are based on caste, Religion, language etc. Which is also called regionalisation and federalisation of Indian politics. But now in few campus like JNU and such other leftist Politics starts from pro-Terriorist Ideology and anti-nation activities. Which may be called Terrorisation of Politics. Remember, both are different. JNU get huge subsidies:-500cr. every year. (very big discrimination in the context or case of  DU and other universities Student’s or academic inst.) I think Stop subsidizing of education in above kind of institutions because above money sent through the our pockets our family pockets etc. If the same government that gives subsidies and reservation to Muslims for their votes also kills a Muslim just to get Hindu votes what the government is trying to do is: increase the animosity between communities and stay in power. JNU doesn’t organize any kind of seminar or SOKE SMAROH for those who killed (especially, Indian soliders) in 2001, parliament attack but seminar held on afzal guru barsi which is Sign by JNU administration waah. That is not freedom of expression. Terrorist Afzul Guru: Because AfzalGuru was convicted of playing a central role in the entire conspiracy leading to the attack on Parliament. Convicted In Under Sections 121, 121A, 122, Section 120B etc. Proved by Indian Supreme court. As a Politics Student i can’t say that SC judgement are base on totally circumzenithal Evidence because In video footage, Afzal confesses to helping the terrorists. A universally applied principle of the law everywhere is that you can be  tried only under laws that were applicable at the date of the commission  of the crime.  Laws cannot be retroactively applied. May be he is guilty of trying to attack the parliament. I know very well that anti-government does not mean ‘anti-national’ but report shows that issues are related to the promote anti-national Activities under the JNU Banner. JNU are respected Academy we all know it. But few wings are trying to do above type of anti-national activity. Stop now, take charge immediately (Government/Police/Administration.)