What Is Global Warming And Climate Change?

A warming planet thus leads to a change in climate which can affect weather in various ways, as discussed further below.

What Are The Main Indicators Of Climate Change?

What Is The Greenhouse Effect?

The term greenhouse is used in conjunction with the phenomenon known as thegreenhouse effect.

What Are The Impacts Of Global Warming?

For decades, greenhouse gases, such as carbon dioxide have been increasing in the atmosphere. But why does that matter? Won’t warmer weather be nicer for everyone?

Increased greenhouse gases and the greenhouse effect has contributed to an overall warming of the Earth’s climate, leading to a global warming (even though some regions may experience cooling, or wetter weather, while the temperature of the planet on average would rise).

While year-to-year changes in temperature often reflect natural climatic variations such as El Niño/La Niña events, changes in average temperature from decade-to-decade reveal long-term trends such as global warming. Each of the last three decades has been much warmer than the decade before. At the time, the 1980s was the hottest decade on record. In the 1990s, every year was warmer than the average of the previous decade. The 2000s were warmer still.

With global warming on the increase and species’ habitats on the decrease, the chances for various ecosystems to adapt naturally are diminishing.

Many studies have pointed out that the rates of extinction of animal and plant species, and the temperature changes around the world since the industrial revolution, have been significantly different to normal expectations.

Water expands when heated, and sea levels are expected to rise due to climate change. Rising sea levels will also result as the polar caps begin to melt.

The WorldWatch Institute reports that “[t]he Earth’s ice cover is melting in more places and at higher rates than at any time since record keeping began”.

Although it has gained less mainstream media attention, the effects of increasing greenhouse emissions — in particular carbon dioxide — on the oceans may well be significant. 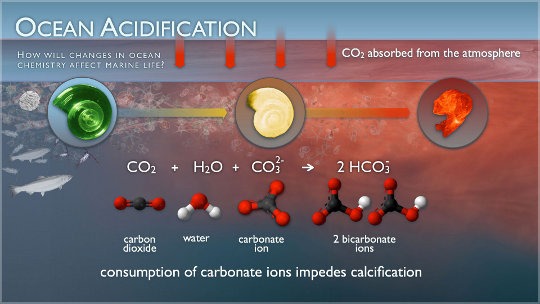 As explained by the US agency, the National Oceanic and Atmospheric Administration (NOAA), the basic chemistry of ocean acidification is well understood.

These are the 3 main concepts:

Other related problems reported by the Inter Press Service include more oceanic dead zones (areas where there is too little oxygen in the sea to support life) and the decline of important coastal plants and forests, such as mangrove forests that play an important role in carbon absorption. This is on top of the already declining ocean biodiversity that has been happening for a few decades, now.

Agriculture And Livelihoods Are Already Being Affected

Failing agriculture in the future have long been predicted.Looking to 2100, scientists who looked at projections of global warming’s impact on the average temperatures during the growing season fear that rising temperatures will have a significant impact upon crop yields, most noticeably in the tropics and sub tropics.

It is recognized that poorer nations will suffer the worst from climate change, either because of geographical reasons, and/or because they will have less resources to cope with a problem (mostly caused by emissions from rich countries over the past decades).

In addition to poor countries, women are likely to suffer the worst, as the United Nations Population fund explains:

Women—particularly those in poor countries—will be affected differently than men. They are among the most vulnerable to climate change, partly because in many countries they make up the larger share of the agricultural work force and partly because they tend to have access to fewer income-earning opportunities. Women manage households and care for family members, which often limits their mobility and increases their vulnerability to sudden weather-related natural disasters. Drought and erratic rainfall force women to work harder to secure food, water and energy for their homes. Girls drop out of school to help their mothers with these tasks. This cycle of deprivation, poverty and inequality undermines the social capital needed to deal effectively with climate change.

t has been known for some time know that developing countries will be affected the most. Reasons vary from lacking resources to cope, compared to developed nations, immense poverty, regions that many developing countries are in happen to be the ones where severe weather will hit the most, small island nations area already seeing sea level rising, and so on.

German Watch published a Global Climate Risk Index at the end of 2011 listing nations that would be affected the most from climate change based on extreme weather such as hurricanes and floods.

Many Sources Of Greenhouse Gases Being Discovered

Pollution from various industries, the burning of fossil fuels, methane from farm animals, forest destruction, rotting/dead vegetation etc have led to an increased number of greenhouse gases in the atmosphere. And, as international trade in its current form continues to expand with little regard for the environment, the transportation alone, of goods is thought to considerably contribute to global warming via emissions from planes, ships and other transportation vehicles.