What is TAPI pipeline?

The Turkmenistan–Afghanistan–Pakistan–India Pipeline (TAPI), also known as Trans-Afghanistan Pipeline, is a natural gas pipe line being developed by the Asian Developing Bank. The pipeline will transport Caspian Sea natural gas from Turkemistanwikipedia.org through Afghanistan into Pakistan and then to India. Construction on the project started in Turkmenistan on 13 December 2015 (Inaugurated by Honb. Vice President of India Mr. Hamid Ansari in Ashkabad caiptal of Tukemistan). The pipeline is expected to be operational by 2019. The abbreviation TAPI comes from the first letters of those countries. Proponents of the project see it as a modern continuation of the Silk Road.

How TAPI Gas Pipeline will fulfill the energy needs of India 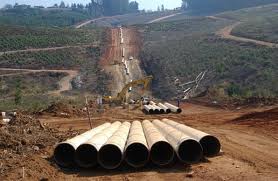 The much delayed TAPI gas pipeline project was formally inaugurated on Sunday, December 13th 2016.
The project is expected to be ready by 2019. Nearly 200 kilometers of the pipeline will pass through the territory of Turkmenistan, 735 kilometers through Afghanistan, 800 kilometers through Pakistan and will reach Fazilka in India. The Turkmenistan–Afghanistan–Pakistan–India (TAPI) pipeline will export up to 33 billion cubic meters of natural gas a year from Turkmenistan to Afghanistan, Pakistan, and India over 30 years. India and Pakistan will get 38 million standard cubic feet per day (mmscmd) each, while the remaining 14 mmscmd will be supplied to Afghanistan.
(Exact quantities of NG being shared to be verified) Meanwhile, oil rich Kazakhstan is willing to supply gas to India. Kazakhstan could supply as much as 3 billion cubic metres of natural gas annually through a proposed pipeline from Turkmenistan to India, according to Kazakh government officials. “Discussions are currently taking place with the Indian side about the possibility of increasing the capacity of the pipeline, taking into account the potential gas supplies from Kazakhstan. Our country is ready to transport up to 3 billion cubic metres annually through this pipeline,” Kazakhstan’s foreign minister recently said at a meeting on energy issues. Well this is a great boost to the energy requirement of India and its quest to become global power.
We need to know these facts about TAPI Pipeline:-
It Carries 90 MMSCM/day, out of which Afghan Share is 14%, India and Pak equally shares the remaining 76 %. We Receive 38MMSCM/Day
Our share/day = 15-25% of Our Natural Gas energy need.
This gas will be utilized by Gas based power plants, Fertilizer manufacturing companies (feed stock is being Gas) and as LPG Distribution. This will meet the energy needed for the newly proposed Manufacturing companies which will come up in Gujarat, Rajasthan and Punjab. Will supplement Make in India campaign which may take at least 5 years to get a complete shape. As a Result, localities gets job, we can manufacture our own products and this will show positive effect on Economy.
( Every manufacturing company needs heating source, gas being cheap and high heating value, it is widely used) This pipeline helps us to connect to the west, which means South Asian Gas Market will be connected to western via Central Asia ( i.e, Turkmenistan). Kazakasthan is showing Interest to supply the Nat gas to us. The feasibility of expanding the maximum gas transport per day is being considered in the recent meetings.
So If LNG import prices goes high, we can directly transport the additional gas either from Russia/Kazakhstan  or west through this pipeline. I feel, Turkemin Govt listens to Russian Govt because there were heavily funded by Russian Govt. With this, gas distribution network within India will become simple. (Operational costs will decrease for distributors like GAIL). I hardly think so, but it will reduce our LNG imports, I can not tell you how much we will reduce our imports, because we are transiting from crude products to LNG/CNG, so it primarily depends when will the pipeline will commission.

How does this benefit India?

Drawing gas from the world’s second largest natural gas field of Galkynysh (Turkmenistan) that holds gas reserves of 16 trillion cubic feet, the pipeline will run to Herat and Kandahar province in Afghanistan, before entering Pakistan. In Pakistan, it will reach Multan via Quetta before ending at Fazilka (Punjab) in India. With its groundbreaking ceremony finally taking place recently on Dec 13, 2015 and implementation soon to follow, it is hoped that the project would get operationalised by December 2019.
The TAPI pipeline will have a capacity to carry 90 million standard cubic metres a day (mmscmd) gas for a 30-year period. India and Pakistan would get 38 mmscmd each, while the remaining 14 mmscmd will be supplied to Afghanistan. However, with Afghanistan agreeing to take approx 1.5-4 mmscmd against the original agreed volume of 14 mmscmd, the Indian volumes may increase to 43-44.25 mmscmd.

SIGNIFICANCE OF THE PROJECT

India’s association with the TAPI project goes back almost a decade. It began as an Observer country at the 9th Steering Committee Meeting in 2006. In April 2008, India was formally admitted as a member of the Project. Since then, India has been actively participating in all the meetings and has been an active votary of the project.

With the drastic reduction and imminent cessation of Russian imports of natural gas from Turkmenistan, China has become Turkmenistan’s sole export market. While welcoming economic cooperation with China, Ashgabat has been working assiduously to avoid undue economic dependence on Beijing and therefore has been motivated to make key concessions for the construction of the TAPI pipeline. Supported by the US and the Asian Development Bank, the gas pipeline would help Turkmenistan to find new consumers in Asia via Afghanistan.
The apparent impasse over Turkmenistan’s terms for financing the pipeline’s construction seems to have been resolved owing to the Turkmen government’s new determination to diversify the markets for its natural gas.

1. The route of the $10 billion, Central Asia-South Asia pipeline traverses Afghanistan’s Kandahar province and the neighboring Quetta region of Pakistan, traditionally the heartland of Taliban militancy. Unless the pipeline is secured from the Taliban that operates on both sides of the Durand Line, and from militant groups operating in Pakistan, it is hard to see how the TAPI dream can go beyond the groundbreaking ceremony.
2. Despite the progress made in the last few weeks, the project still faces certain commercial constraints that have the potential to stall the pipeline construction. Foremost among these revolves around gas pricing concerns, primarily of India and Pakistan. India apparently is not happy about the unit price of gas quoted by Turkmenistan and is hoping to re-negotiate the issue.

GAIL India Ltd will hold stake in the four-nation company being set up to build the Turkmenistan-Afghanistan-Pakistan-India (TAPI) gas pipeline. Turkmenistan’s state-owned TurkmenGaz will be the leader of the consortium and will take a minimum 51 per cent stake. Since among the four state-owned firms, including GAIL of India, neither have the financial muscle nor the experience of a cross-country line, an international company is needed to build and operate it in hostile territories of Afghanistan and Pakistan.
Owing to Turkmenistan law, which precludes the private ownership of land, both U.S. oil majors Chevron and Exxon Mobil withdrew from consideration after Turkmenistan’s refusal to issue an equity stake in the Galkynysh field in exchange for assuming the risk of construction. Now, with Dubai-based Dragon Oil’s participation, construction of the proposed project can be expected to move ahead with full speed.

The success of a trans-national Central Asia-to-India pipeline would certainly spur the expansion of current efforts to create road and rail transportation connectivity between Central Asia and India. With this connectivity, India would be able to deepen its bilateral economic partnerships with the Central Asian republics and become a major player in the emerging Eurasian regional architecture, creating the possibility of new alliance formations that would help ensure that Central Asia would not become subject to some form of Sino-Russian joint hegemony.