Brief Overview:- A great discussion between Trilok Singh and some of the top environmentalist scientists and professors like Dr. Ravi Agrahari’s (Scientist in Delhi IIT), Dr. Dheraj Sir (Prof. at Kirori mal College, DU) etc.  After the hard discussion and with the source of ARCHAEOLOGICAL SURVEY OF INDIA, and BBC. I will try to find the core point which is responsible for TAJ MAHAL TURNS GREEN?

(1) The Historical Monument is turning green due to release of faeces and dirty by insect, Geoldichironomus (Chironomus calligraphus).

(2) Yamuna has become to stagnant due to pouring of waste directly into it, that fish that earlier kept insect populations in check are dying.

(3) This is Resulting into “Explosive Breeding” of the insect, which is a biological indicator of water quality and localised water pollution. 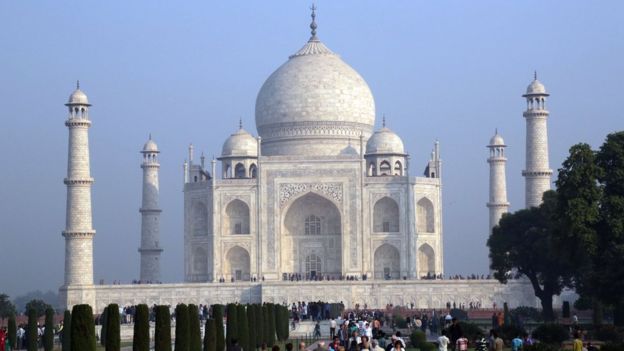 With the source of BBC. India’s iconic Taj Mahal has been threatened in recent weeks by insect poo – environmentalists say that bugs from the polluted Yamuna river nearby are invading the monument, leaving greenish-black patches of waste on its pristine white marble walls.

Over the years, the 17th Century monument has been threatened by pollution, unabashed construction, a crematorium and even bombs.

The BBC’s Geeta Pandey in Delhi reports on five threats – past and present – to India’s “monument of love”.

Mr Joshi has filed a petition in the National Green Tribunal – a special tribunal set up by the government to deal with environmental disputes – saying that the “explosive breeding” of the pests in the polluted Yamuna river is marring the beauty of the monument. 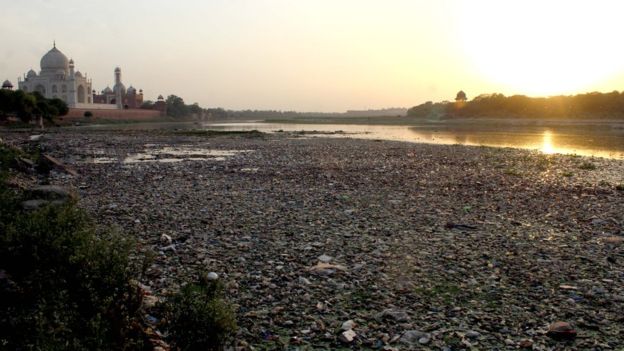 “Fifty-two drains are pouring waste directly into the river and just behind the monument, Yamuna has become so stagnant that fish that earlier kept insect populations in check are dying. This allows pests to proliferate in the river,” Mr Joshi told the BBC by phone from the northern city of Agra where the Taj is located.

The stains the bugs leave on the marble are washable and workers from the Archaeological Survey of India (ASI) have been trying to scrub the walls clean, but Mr Joshi says frequent scrubbing can take the sheen off the marble.

He says the problem has a simple solution – just clean up the Yamuna. On Monday 25, July 2016. UP CM Akhilesh Yadav ordered officials to “trace the factors behind the problem and find a solution”. 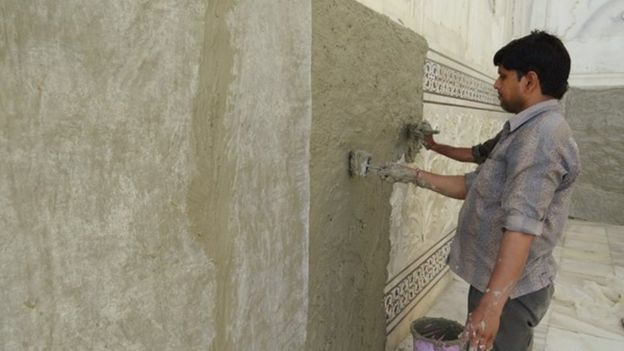 Built by Mughal emperor Shah Jahan as a mausoleum for his beloved wife Mumtaz Mahal, who died in childbirth, Taj Mahal is often described as one of the wonders of the world.

It is also India’s biggest tourist attraction, visited by heads of states, celebrities and millions of Indian and foreign tourists every year.

But pollution from the industries in Agra and a nearby oil refinery have seen the white marble yellowing over the years.

To restore the monument’s beauty, the ASI has been applying “mud packs” on its walls to draw out the pollutants. Manoj Bhatnagar of the ASI’s chemical department told the BBC that the mud-pack is based on a traditional recipe used by Indian women from ancient times to restore a natural glow to their faces.

“A layer of fullers earth – a type of lime-rich clay – mixed with water is applied over the walls and left on for 24 hours or more to dry,” he said. “Once it dries, the mud is removed and the surface is washed with distilled water to remove impurities.” The marble mausoleum had been given this treatment several times in the past: in 1994, 2001, 2008 and 2014.

Mr Bhatnagar said the next round of beauty treatment will begin once the weather cools a bit – the heat wave currently blowing across India will dry out the mud-pack too quickly and render it ineffective. 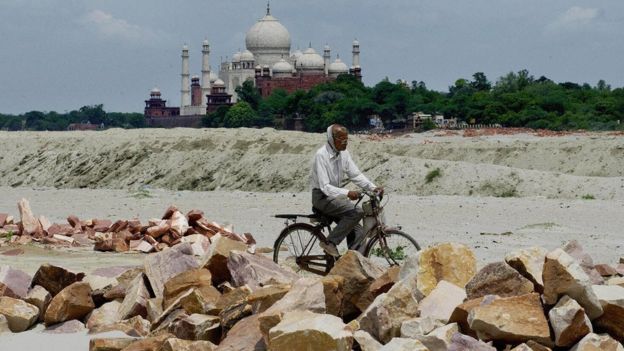 In November 2002, the government of the Uttar Pradesh state began work on a shopping complex near the Taj Mahal.

The state government, led by then chief minister Mayawati, said the mall was being constructed to relocate shops that had been removed from the Taj Mahal under a Supreme Court order.

The authorities said that once the mall opened, tourists would be able to visit the Taj without having to go through the crowded and polluted streets.

However, the project prompted howls of protest from environmentalists who said the project violated environment protection laws and placed the monument at risk. The proposal was eventually abandoned.

Last year, India’s Supreme Court ordered a wood-burning crematorium near the Taj Mahal to be moved to protect the monument from the smoke and ash blown over from funeral pyres.

The court said the authorities could either move the 200-year-old crematorium or build an electric powered one to reduce pollution to the monument.

The state government agreed, but faced protests from some Hindu groups. So far, the crematorium still has not been moved. 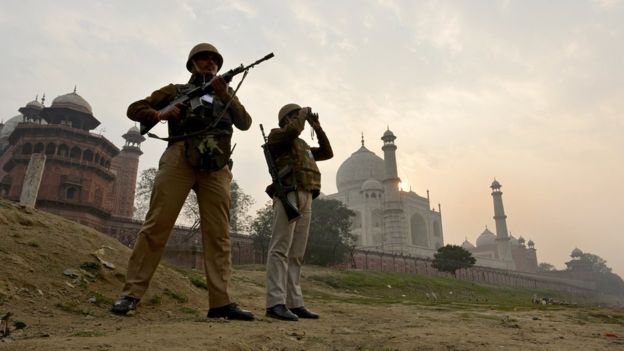 This was not the first time the Taj had been on the radar of militant groups – in January 2001, security was stepped up after reports that Pakistan-based militant group Laskhar-e-Taiba was threatening to blow up the monument.

Police said they were investigating an e-mail from the group threatening to attack the Taj, but a spokesman for LeT denied the allegation, saying it was Indian propaganda to discredit them.

Why is the Taj Mahal white?

Because it is constructed of white marble : The high quality, expensive marble was sourced from the quarries of Makrana in Rajasthan. Over the year due to pollution caused by the increasing number of factories in Agra, the immaculate whiteness has been turning yellow. It was proposed that the marble be treated with a chemical mix that included multani mitti in order to restore its white colour.

What is the secret of Taj Mahal’s basement?

Its been said, At the basement of Taj Mahal, there is a vedic Shiva temple. Taj mahal was not built by Shahjahan, it was built by king of jaipur ‘jaysinh’.

I need your feedback on above through the comment box. Thanks.