Prof. Ajay Gudavarthy, Done the Inaugural Comments and talks about the changing nature of Indian Politics. Further,  As a Post-Congress system with cold type of internal alliances between social groups cracking up and that new type of social groups emerging, he added.

Perhaps, Secularism as an idea does not merely refer to separation between religion, state and politics. Moreover, as a philosophical proposition secularism also would mean an ability to trust and solidarity with unlikely social groups essentially with strangers and in that scene Ajay Gudavarthy believe that its the opposite of Xenophobia (phobia of the strangers).

In Short, In the Indian context secularism has not excluded sectarianism.The International conference will focus on new forms of sectarianism that have emerged as part of democratic and progressive politics in India, but also including coverage of related experiences in other countries.

And also On Theory of Sectarianism Chair: Anupama Roy done the outstanding talks ragard the same.

Neera Chandhoke, Provides us clear thoughts about the Political Dilemmas of Contemporary India. Chandhoke, more focus on theocracy of west she believe that the concept of secularism in crisis. we have to re-examine the above.

Moreover, Chandhoke generates the huge idea around public sphere. Now seculars comes in a public sphere in a interest of democracy. She believe that western theory never looks in India. Political secularism established in spirit which is deeply politicize. (looking back to 19th century).

Chandhoke, In public sphere, Religion are not in issue while Hinduism concerns. So, How can deal with the social practice? Vedanta as a nationalist projects? Creation of public sphere are still important in Indian Politics. She says that debates on secularism in india comes from minority rights in India. Chandhoke, also talks about Indology too.

During the Tea break, I asked a question to Neera Chandhoke. My question to ma’am: In Contemporary time, Do you believe that Idea of the public is very critical today? what about the emerging notion of radical ideas around the same (Now, radical ideas are emerged). We have larger collectivities, Responsibilities, Duties etc. worlds becomes a very larger place. First, ma’am discuss with David (Do you have answer?) David, haha. Ma’am told me that it’s a matter of dialogue.

ON UNDERSTANDING THE ANALYTICS OF UNIFORM CIVIL CODE (UCC) AND PASMANDA FRAME : AFROZ

Afroz Alam, Associate Professor, MANUU. He believe that, UCC is just a Colonial Construct, it is a product of human mind etc. Alam, large number of people does not know about the Uniform Civil Code and Muslim Personal law? They have no any kind of definition. Only they are ready to die. etc.

HOW TO STUDY PHILOSOPHY IN INDIA? 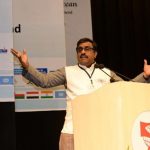