Ahead of the violent protest against “Citizenship Amendment Act” (CAA) on Dec 20, The family of the IAS-aspirant named ‘Suleman’, 20, who was allegedly killed in police firing during the concerned protests on Dec 20, has lodged a complaint against six policemen for the same incident. As per the report, When violence erupted in the “Nhatur village” in Uttar Pradesh’s Bijnor district on Dec 20, both Anas, 21, and Suleiman, were allegedly hit by bullets fired by the police.

While the two were taken to a local hospital where Anas was declared dead on arrival and Suleiman succumbed to his injuries during treatment. Later, the Uttar Pradesh Police admitted that their bullets killed only Anas and not Suleiman. However, Suleiman’s family has now filed a complaint against the six policemen alleging that he was shot by police bullets during the anti-CAA protest.

Notably, The family alleged that he was returning home after ‘Friday prayers’ when he was accosted by Station House Officer (SHO) named Rajesh Solanki, Bijnor in-charge Ashish Tomar as well as some constables. The family claims that the policemen dragged him to a lane where a constable, identified as Mohit, shot Suleiman at the behest of other police officers, The complaint attributed.

The families claim the police intimidated them after the incident and warned them not to speak to anyone about the incident. Although, This incident was witnessed by many people as well in the area who are apparently afraid to speak up against the cops. Suleiman’s family has also claimed that the police left him to die in the lane and when the family took him to a local hospital, he was declared dead, IANS news agency attributed.

After this, the police took the corpse for a post-mortem and then handed over the body to the family on December 21. The police allegedly did not allow the family to bury Suleiman’s body in his native village Nhatur. He was preparing for his civil services exam and had nothing to do with the anti-CAA protests. Meanwhile, Uttar Pradesh Director General of Police (DGP) Om Prakash Singh has admitted that only one person has died in the police firing in the state.

The DGP said that, “not a single bullet was fired” during the unrest, the Bijnor police for the first time has admitted to have opened fire in self defence during the protests. While Bijnor Superintendent of Police Sanjeev Tyagi told that, “When one of our constables moved ahead to take back the gun that was snatched away by the protesters, a member of the crowd opened fire at him”. He had a narrow escape.

Suleman’s brother ‘Shoaib Malik’ told that, “My brother had gone to offer namaz. He was returning home after the namaaz to eat something. He had fever for the last couple of days. So he did not go to the mosque near our home. He went to another mosque. When he stepped out, there was lathi-charge and tear-gassing by the police. The police picked him up and shot at him,” attributed at IASmind.com. Despite this, Bijnor was one of the districts in UP affected by violence during a demonstration against the CAA where protesters and the security forces clashed.

On Dec 30, In a 14-page memorandum to Governor Anandiben Patel, signed by Congress leader Priyanka Gandhi and UP Congress chief Ajay Kumar Lallu, the congress stated the conduct of the police had been observed and reported to be patently unlawful, destructive of the ‘rule of law’ and repressive of honest citizens. It is unbefitting of a force that is duty bound to safeguard and protect the rights of every citizen, the memorandum remarked.

Following the same, A full judicial inquiry is required into each and every one of these incidents to ascertain the culpability of the administration and the police and provide justice to the families of the deceased,” it said. It also demanded that students participating in peaceful protests be assured they will not face academic or legal repercussions and their right to free expression will be protected and upheld by the law and the state.

Consequently, The Yogi Adityanath government in UP has already set up a Special Investigation Team (SIT) that will probe cases of violence during the protests against the CAA in the region. However, the law and order system in India remains in discourse by many ways, so the top policy makers and the government need to fix such issues as far as “Human Security” concerns. In this age, Government can talk about “Employment Bill” for educated youth to control the “Radicalization of Youth”, they can also implement Woman’s bill, Population, Poverty, Hunger, Water security, Pollution, Cyber security and so on. 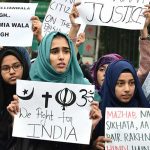